The quote on the left demarcates the point in Huck Finn’s river journey with his friend, the slave Jim, where Huck is just beginning to see their way clear of the slave states. Here you can also see the repeating waves, printed on glass-cling, wrapping its way from the top to the bottom of the gallery’s staircase.

“We judged that three nights more would fetch us to Cairo, at the bottom of Illinois, where the Ohio River comes in, and that was what we was after . . . “ 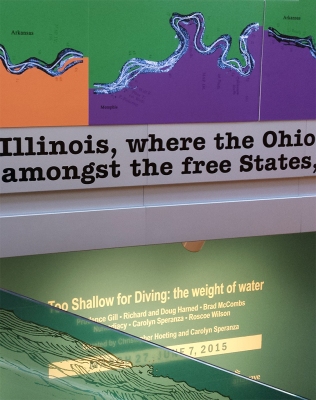 ” . . . We would sell the raft and get on a steamboat and go way up the Ohio amongst the free States, and then be out of trouble.”

As a gold medal winning Olympic champion, Muhammad Ali returned from Europe to Louisville Kentucky in 1960 to find Jim Crow alive and well. In one of his new jobs, Ali had to enter through the back door. No one knows if the story is folk-lore or fact, about Ali throwing his gold medal into the Ohio River after being refused service at a drugstore counter and run out of the shop by a gang of white motorcyclists.

Coming to the end of the journey, you would have heard Ali’s voice, as I did many times as a child. He was a hero of my father’s– for his stand and integrity in objecting to serve in the Vietnam War. 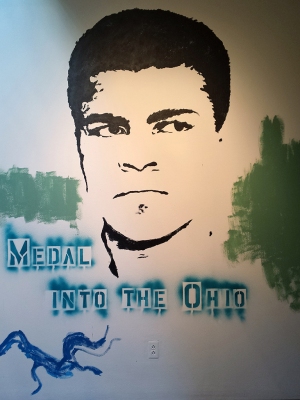 As we move further down the rivers, the birds get bigger, darker, and more sinister. Again, this is a detail from the transparent, glass-cling printed wave element in the front. 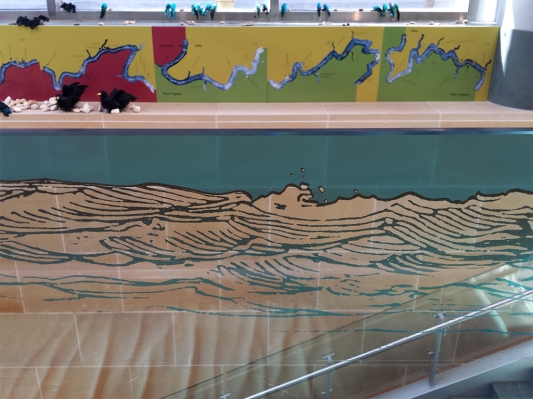 Not only are the Ohio and Mississippi Rivers some of the dirtiest in our country, environmentally speaking – they hold our history of human trafficking. The crows make their appearance when we reach the point in the river where it divided the country in terms of slavery. In Kentucky, you were a slave. Cross the Ohio River and you were a freed person.

The mossy looking panels are from pencil drawings made in the 1818 original Navigator that I had scanned for the river maps. Weather these drawings were made in 1818 or not I don’t know. They are hard to see here but are clearly of the rivers and river-fronts.

In addition to being the messengers of darkness, specifically of slavery and racially-based death by cop, the crows had a job to do: find Muhammad Ali’s medal. 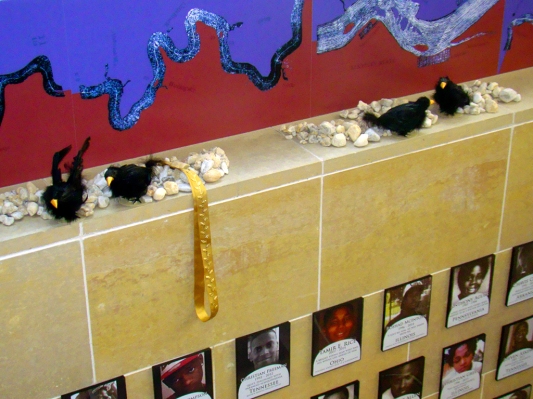 As you walked down the stairs, the central part of the journey is laid out in map panels to your left, with text clipped from Huckleberry Finn. Directly in front of you was a group of memorial portraits. 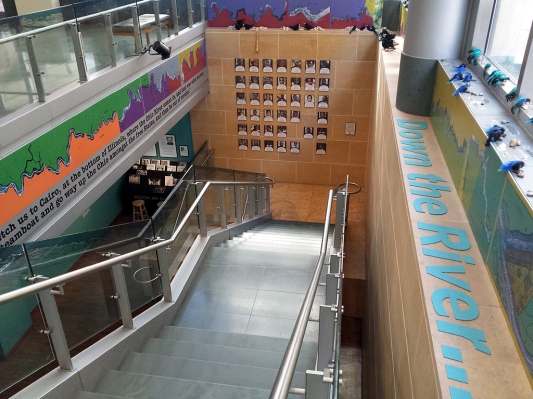 Each of these young black men and boys had died in the hands of the police, in the states along the Ohio and Mississippi Rivers.

Some of them were stand-up like Johnny Gammage, others were living on the rougher side of life, but absolutely none of them had done anything that warranted being shot and killed by the police. The entire gallery, both floors, could have been filled with this type of memorial portrait- there are enough deaths just like these to warrant it.